I’m not sure exactly where this idea originated first, but I’ve seen it floating around on Pinterest (I’ve finally joined, yeah! Click here for my profile.) and Facebook and had to give it a try. It’s not the most healthy activity, but it was a whole lot of fun and definitely a keeper in my lesson plans. 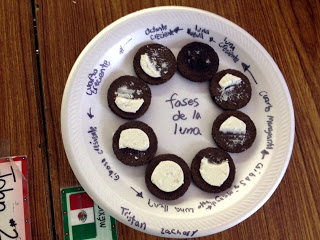 All you need is a plate, 8 Oreos, and a Sharpie marker (I apologize for using Styrofoam plates. I don’t what I was thinking. Paper plates would have been the better choice since they will end up in the trash afterwards). My students were also allowed to use a diagram in our science book. I had students work in pairs, each one doing four of the eight phases and then labeling them.

Once pairs finished the moon phase plate, I took a picture of it. I am now printing the pictures out (on the other side of used paper), grading them according to accuracy, teamwork, and completing the activity in Spanish. Then I will send the pictures home to parents.

I have such a sweet bunch of kids. One student said, “¡Gracias por hacer este buen proyecto!” (Thanks for doing this great project!) I’m not used to such appreciative kids! They are really amazing.